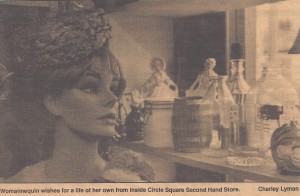 Gladys, the mannequin, lives in the front window of the store. She didn’t always have a name, and was simply referred to as wommanequin in the photo on the right, taken by my friend Charley Lyman. He used this picture for a photo opp in the Missoula Independent in the early 1990’s. I immediately cut it out,framed it, and hung it up in the store. Later, a friend remarked that the mannequin needed a name, but nothing seemed quite right,untill, while working on the estate of my great aunt Gladys I came upon this photo of her as a young woman. Walla ! Womanequin had a name and Gladys had a legacy,(more on her later.) She was in the store when I bought it, and is in pretty rough shape yet, she has a cult following in MIssoula. Each month she is dressed and arranged in an array of store goods, a picture of which will be featured on this websight. She has also starred in a super eight film of Charles Bukowski’s “Love for $17.50” filmed by local artist Andy Smetanka. In the film she is ravaged by a jealous lover, yet thankfully, made it back to the store in one piece.

My Great Aunt Gladys was quite a character. Born on Halloween, she married and buried three husbands and had no kids.She stood about five feet tall, in heels. I can’t really say I knew her well as she was quite old by the time I came around. She was the kind of relative that would come to our house twice a year, (Easter and Thanksgiving,)  and stay a few days at a time. She always drove a new Cadillac. When we would go to the city for dinner, she would have me drive, which was very intimidating for a sixteen year old. I didn’t understand why she didn’t drive. Now I know that she was always very close to losing her drivers license because of too many speeding tickets. Cadillacs like to go fast, and so did she.. Also, this freed her up to consume alchoholic beverages, which she also liked.  When I would drive she would make comments about my driving increasing the intimidation. She was a very opinionated person. For instance, when I declared my intention to study Anthropology at College she said, “that’s stupid why the hell would he want to do that.”  Later I realized maybe she was right and changed my major to Biology. Same answer, “that’s stupid , he’ll never make any money at that.”   So imagine my trepidation when I decided to buy a junk store in Missoula  Montana, I could  hear it already.. Her response?  “Why that’s the first smart thing he’s ever done .” I think my family softened it a bit by calling it an antique store, but still I was relieved. You see she had run a small store herself,(The Classic Shoppe,)  and had a thing for antiques..And once again she was probably right. Not that I regret getting a degree or anything.

I didn’t talk to her much after that as Montana is a long way from upstate New York (Fulton,) where she lived .It was a town I was soon to experience firsthand. As these things go ,she got sick and eventually died at the ripe old age of 93.` She didn’t leave me any money, but she had made provisions for me to come and clean out her house,where she was lucky enough to live untill her demise. This made no sense to me at first. I knew they had second hand stores in New York, why haul everything thousands of miles?  The answer? She didn’t want the locals going through her things!  Apparently she had a high opinion of herself and her things, and a much different opinion of many of the  inhabitants of her small home town.  It also took the pressure of the executor of her will,(my mother,) to dispose of all her carefully selected belongings. So I boarded an airplane, rented a giant U-Hall, and set to going through her house. There was general skepticism amongst the family as to whether I could get everything into that truck but I managed to do it with no room to spare. Going through someone’s house is an intense experience. Every detail is revealed, good and bad. I felt when it was done I knew her in a way I hadn’t before. I could see why she didn’t want the local dealers to go through her stuff. I also learned alot about collectibles She had a good eye. She really liked shoes. She had a thing about the french,although she was English. She had good taste.. Overall I’m very glad she arranged it that way. It benefited everybody involved and provide me a link between my family and my store.